Crimea: from dehydration to floods 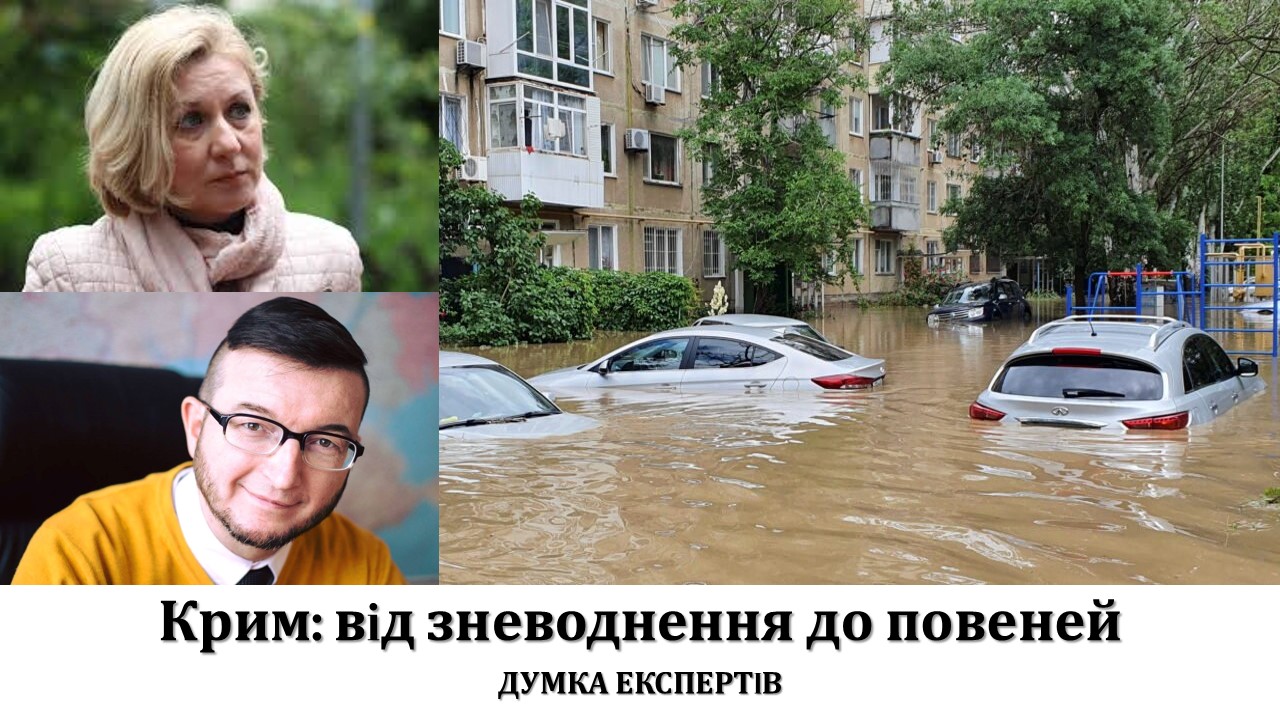 Why are the rains and floods in Crimea so destructive?

Where is the line between abnormal climatic manifestations and disorder?

In recent years, natural disasters have manifested themselves in different regions, even where abnormal (catastrophic) weather events were previously rare. We are seeing an increase in the frequency of various extreme weather conditions, but climatologists note that these conditions have become more powerful and more widespread in the south of Ukraine. Climate change is considered to be the main cause of weather anomalies. However, ill-considered, irrational and mismanaged human activity contributes and exacerbates the negative consequences from them (uncontrolled building, maintenance of water pipelines in an inappropriate form, their littering, lack of systematic strengthening of slopes and river banks, etc.).

For example, on the territory of the Crimean peninsula, only this summer, several heavy downpours were recorded, which provoked floods and mudflows and, as a result, a number of large cities and towns and lands found themselves in a natural disaster zone (Yalta and Kerch, June 17-18, 202; Bakhchysarai district , Yadta, Saky, etc., July 3-7, 2021, etc.).

According to weather forecasters, an active cold frontal section, passing through the territory of the peninsula on July 3-7, caused heavy rains in the mountains, in the southwestern, southern and central regions of Crimea. So, in the Bakhchysarai region, 113 mm of precipitation fell per day, in Yalta 49 mm, on Ai-Petri 85 mm, in Mykytsky-Sad 42 mm, in Simferopol 35 mm. For these territories, this is from 0.5 to 2 monthly norms of atmospheric precipitation.

As the Crimean hydrologists said, intense precipitation in June-July on the peninsula had a positive effect on the filling of reservoirs, but the question is about the quality of these waters, which are a mixture of mud and sewage.

As a result of heavy rainfall these days, the shallow rivers Belbek and Kokkozka and the river-brook Su-Akhande turned into turbulent mud streams and overflowed the banks, flooding the coastal territories. For example, the water level in the Belbek River rose by 2.4 m, and others by 1-1.5 m.

Unfortunately, there were some casualties. The mudflow washed away two women, who died as a result, and it also caused the death of domestic animals.

For more than a day, the population of the affected areas was left without electricity, drinking water, food and communications. There is no public warning system. In general, as a result of the destructive contidion for several days, a real Armageddon has come for the Crimeans!

The Crimean Emergencies Ministry and volunteers evacuated part of the population from the disaster zone (Sokolyne, Holubynka, Kuibyshevo were the most affected).

On July 7-8, there was no water supply in the flooded settlements of the Bakhchysarai region, drinking water was unusable, as well there were severe problems with sewerage and drainage system as a whole.

On the one hand, this is a natural disaster and we were not insured against it. On the other hand, there was the other side of the event, including the courage of the rescuers, the size of the damage caused and the carelessness of the local authorities. It is no secret that certain local authorities, the state system for monitoring the safety of life (for Crimea, these are the Russian units of the Ministry of Emergency Situations) should (or maybe are obliged?) to provide water supply, monitor the state of the drainage system, clean river beds, eliminate litter and do not allow littering at all, carry out anti-mudflow and landslide measures, strengthen the slopes and banks, etc. For example, at the same time, in Alushta (35 km from Yalta), due to the fact that the storm drains were cleared, the showers passed practically without consequences.

It should be admitted that the Ukrainian authorities, alas, are not ideal and there are a lot of the same problems in Ukraine, we are not ready to say that such weather phenomena will not catch our authorities by surprise, but the Russian occupants promised the Crimeans a better life.

Due to such weather conditions with extreme rainfall, the problem of filling the reservoirs can be temporarily solved to a certain extent.

The current situation has shown, first of all, the unwillingness of local authorities to respond promptly to possible natural disasters and to provide effective flood control measures. Various natural phenomena from time to time occur on the territory of the peninsula, but, in practice, no conclusions have been drawn from previous situations.

The drainage system must be constantly monitored and maintained in proper form, bank protection works in new weather conditions must become a daily concern of the authorities and utilities. So, the problems for the population of Crimea associated with changing climatic conditions, rains do not end, but will gradually acquire new features and challenges.