On Tuesday, August 9, the Crimean Tatar Resource Center and the State Service of Ukraine for Ethnopolitics and Freedom of Conscience held a briefing on the occasion of the International Day of the World’s Indigenous Peoples, during which the speakers spoke about the situation of the indigenous peoples of Ukraine in the context of a full-scale war. 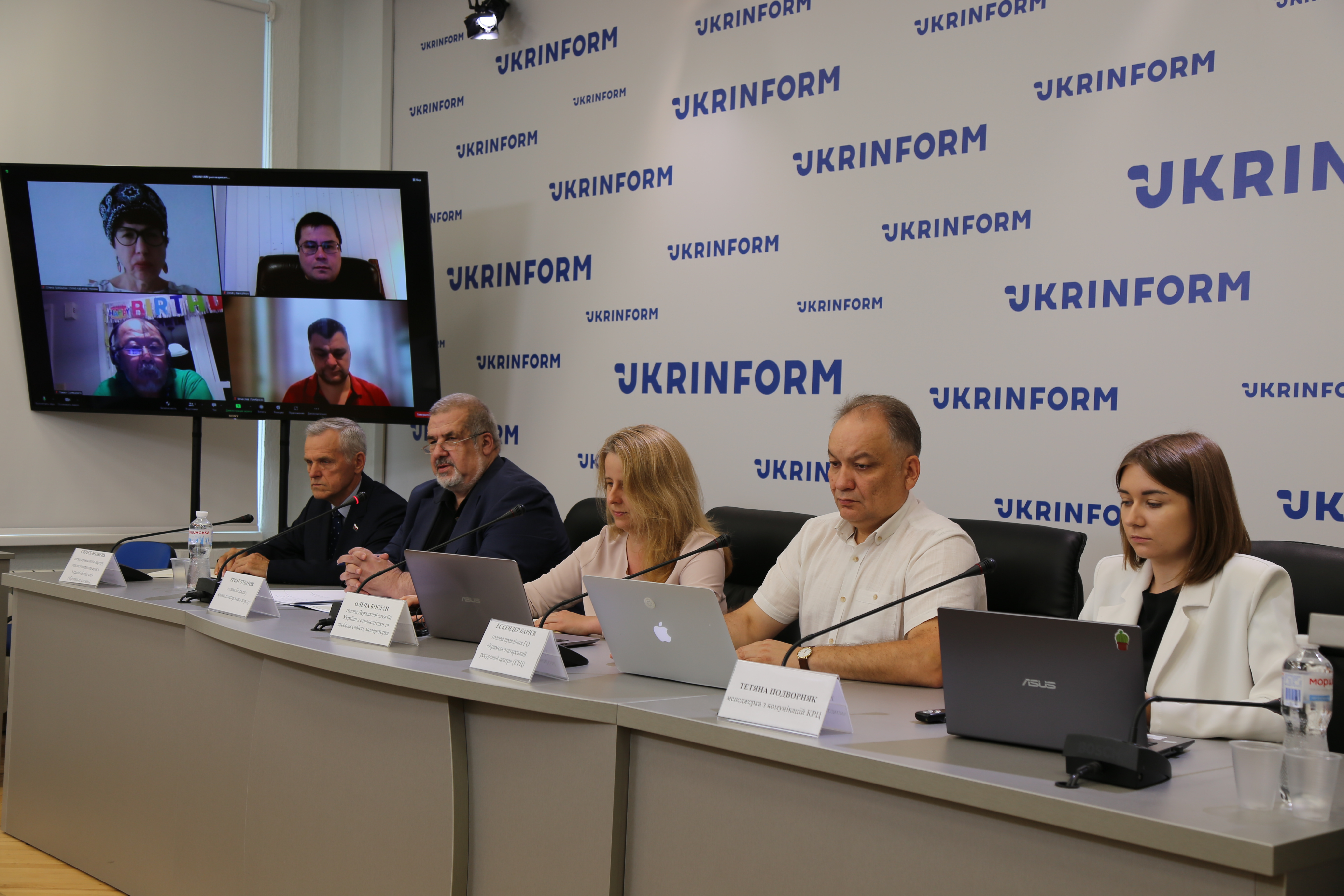 2. Olena Arabadzhi – a representative of the Karaite people, a member of the board of the public organization Melitopol National-Cultural Karaite Society Dzhamaat (online participation)

4. Viacheslav Lombroso – representative of the Krymchak people, Deputy Chairman of the International Public Organization Foundation for Research and Support of the Indigenous Peoples of Crimea (online participation)

5. Refat Chubarov – Head of the Mejlis of the Crimean Tatar people

6. Pavel Suliandziga – representative of the Udege indigenous people of Russia

7. Dmitry Berezhkov – representative of the Itelmen indigenous people of Russia

Moderator: Olena Bohdan – Head of the State Service of Ukraine for Ethnopolitics and Freedom of Conscience (DESS) 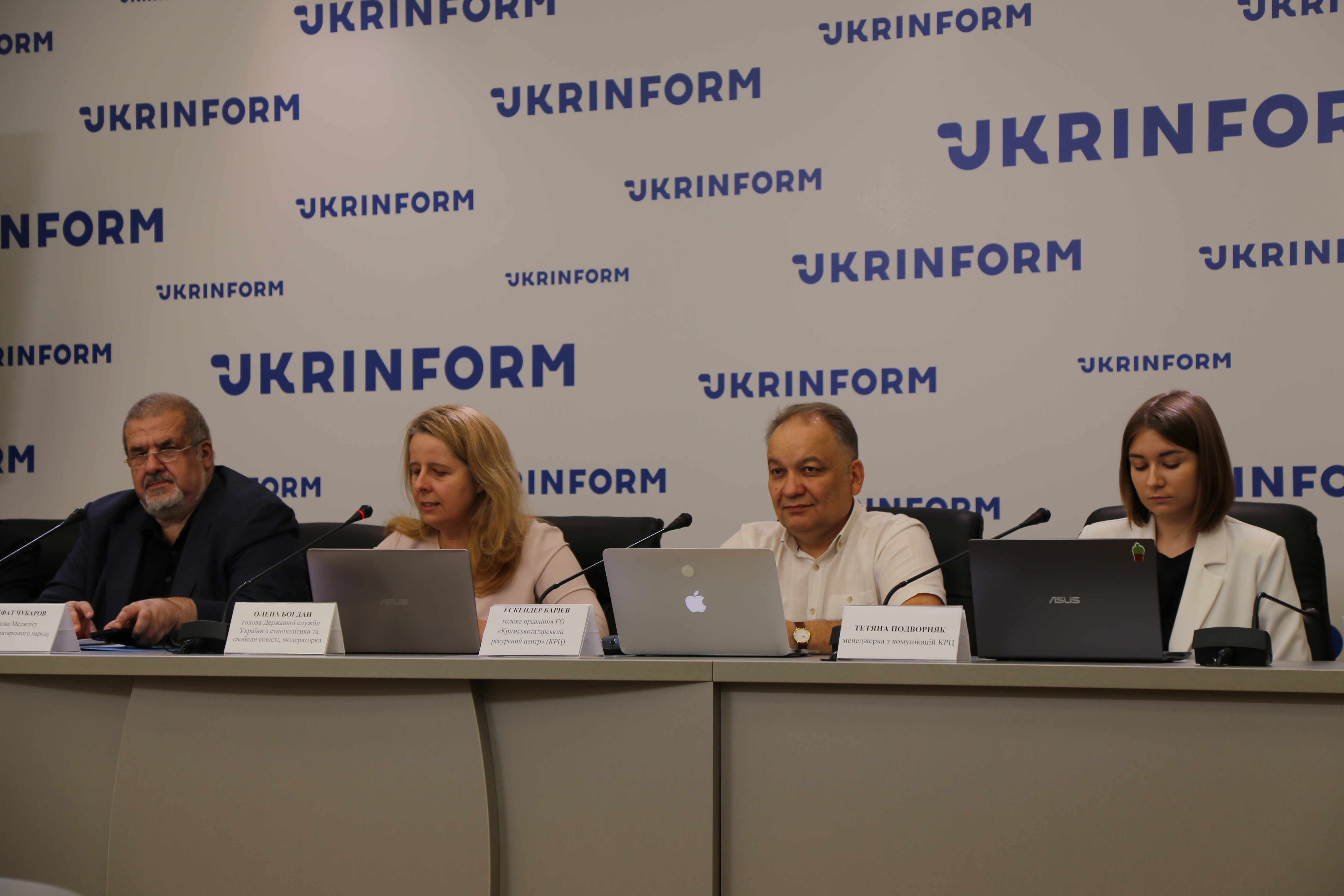 During the event, the speakers informed about the history of the International Day of the World's Indigenous Peoples, about the situation of the indigenous peoples of Ukraine in the context of a full-scale invasion, and also presented visual and informational content prepared by the Crimean Tatar Resource Center for this day as part of the #LIBERATECRIMEA information campaign.

“In general, the issue of preserving the cultures of indigenous peoples today is becoming very acute, since indeed in many countries of the world they have become endangered due to both unintentional assimilation processes and forced assimilation, which, unfortunately, still takes place in those countries where the level of freedom is not so great”,- Bogdan said.

“And our occupied house became one of the bridgeheads from where the Russian occupants stormed on the morning of February 24 and launched an attack on the mainland of Ukraine. Today, rocket attacks are being carried out from the occupied Crimea, planes are taking off, Russian ships are sailing in our coastal waters attacking Ukrainian lands. So, this is a big challenge, a tragedy, but we are doing everything to ensure that the situation changes radically as soon as possible”,- the head of the Mejlis said.

Representatives of the Karaite and Krymchak peoples Olena Arabadzhi and Viacheslav Lombroso, respectively, also spoke during the press conference. They talked about the situation of their peoples in the conditions of war and the challenges they have to face every day.

“This year, for the first time, Ukraine celebrates the International Day of the World’s Indigenous Peoples in the status of a country that can boldly say that it is trying to do everything to protect and develop the three indigenous peoples of Ukraine (Crimean Tatars, Karaites, Krymchaks), not by word, but by the letter of the law”,- Eskender Bariiev stressed. 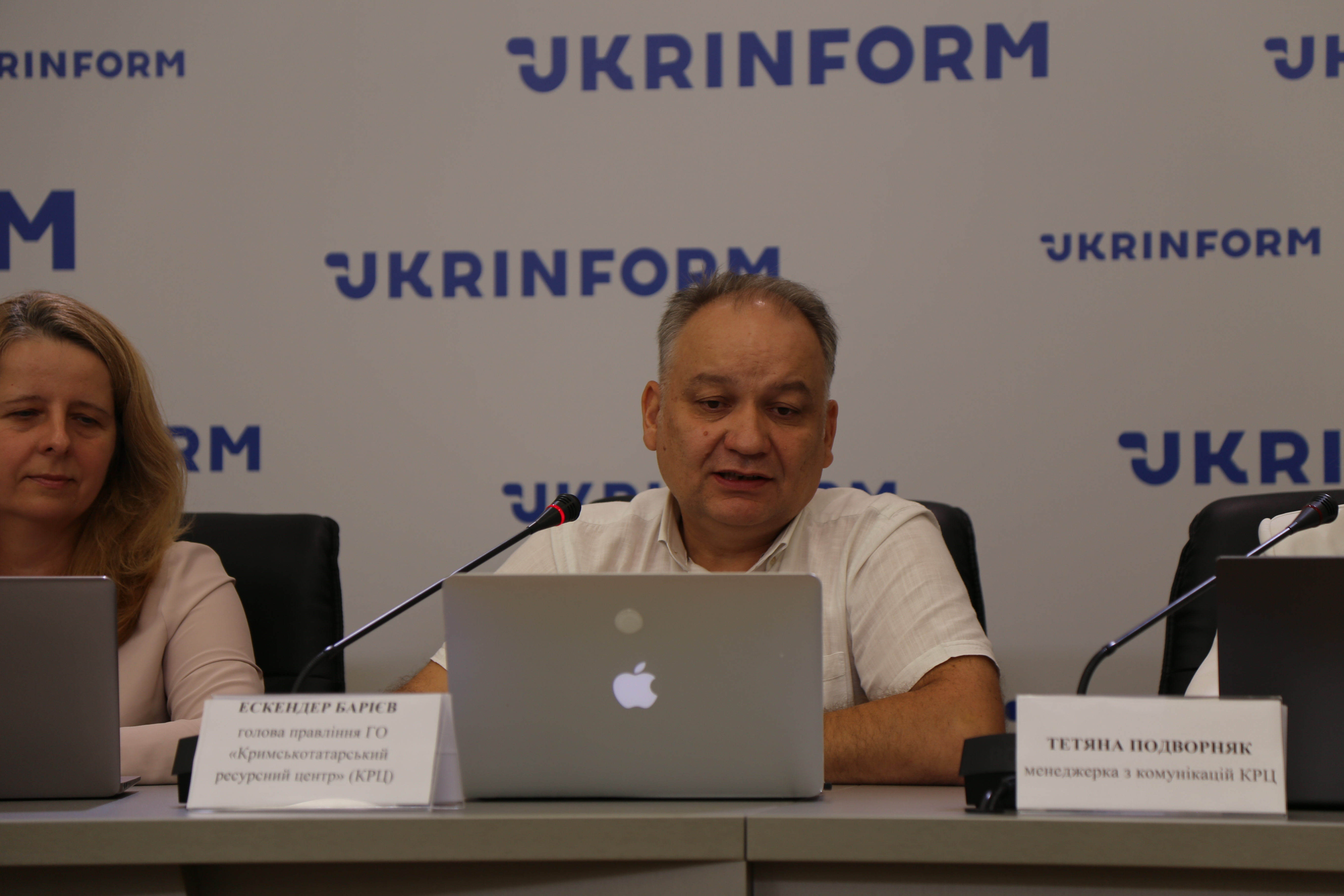 However, the Head of the Board of the CTRC noted that it took Ukraine a long 7 years to adopt a Law that meets all the requirements of the Constitution of Ukraine and the articles of the UN Declaration on the Rights of Indigenous Peoples.

“The Mejlis and the CTRC team, since 2014, have been actively working on the adoption of this law in Ukraine, and also systematically covered the problems of the three indigenous peoples at such international platforms as the UN Permanent Forum on Indigenous Peoples and the Expert Mechanism on the Rights of Indigenous Peoples, repeated meetings with Victoria Tauli The Corps is a special rapporteur on the rights of indigenous peoples, dozens of reports to the human rights mechanisms of the UN, the OSCE and the Council of Europe on the protection of the rights of indigenous peoples”,- he added.

“All our visual information products are aimed at ensuring that the Ukrainian society has the best possible knowledge of the history of the International Day of the World's Indigenous Peoples, and also understands why it is important to have information about the situation of the indigenous peoples of Ukraine. In addition, it is with the help of our visual products that we strive to achieve an even greater unification of the four peoples within one state. Therefore, we call on all those who are not indifferent to participate in our activities”,- she said.

We remind you that earlier the Crimean Tatar Resource Center presented a new information campaign #LIBERATECRIMEA, which is designed to raise the level of awareness of the population of Ukraine about the situation in the occupied Crimea. 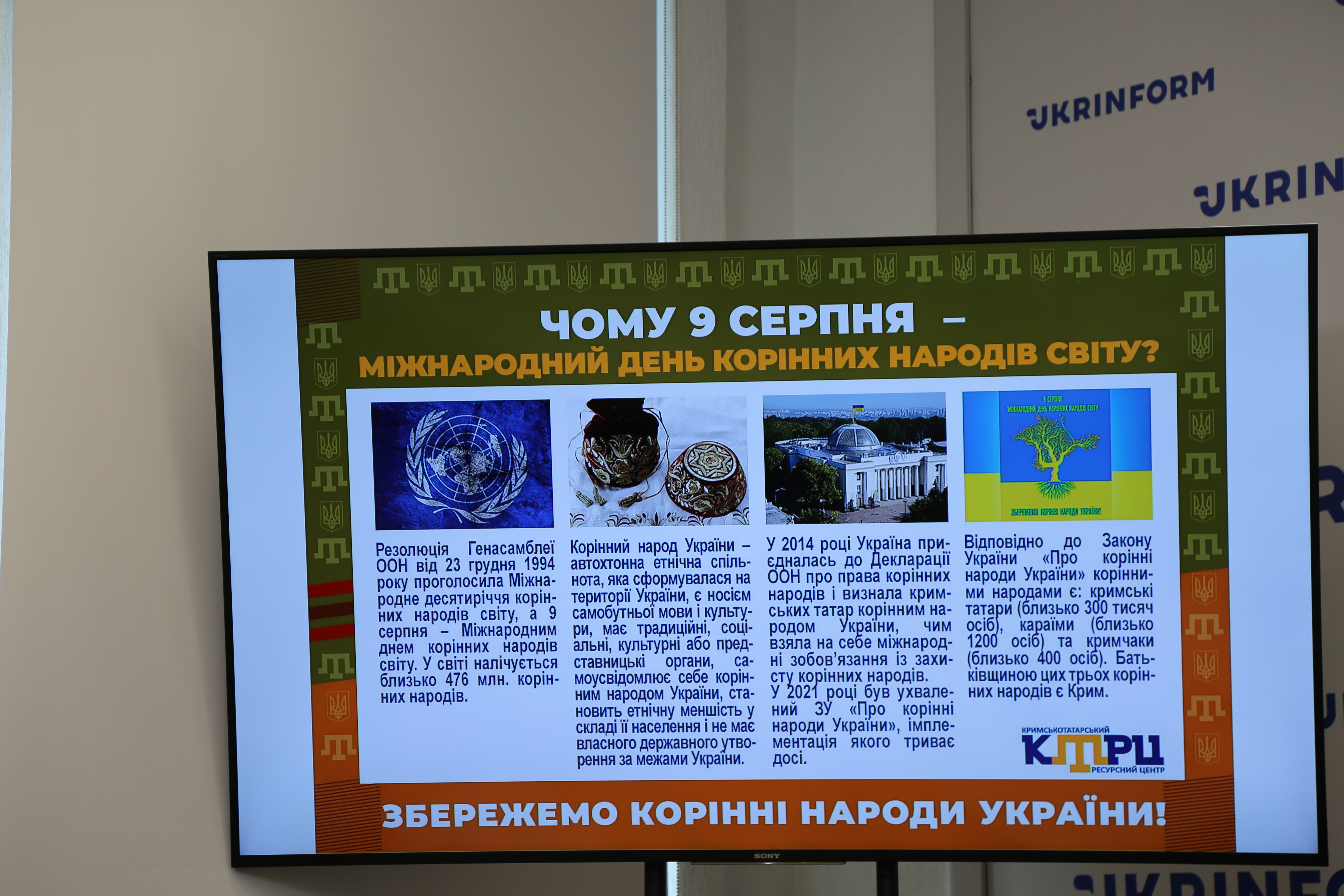 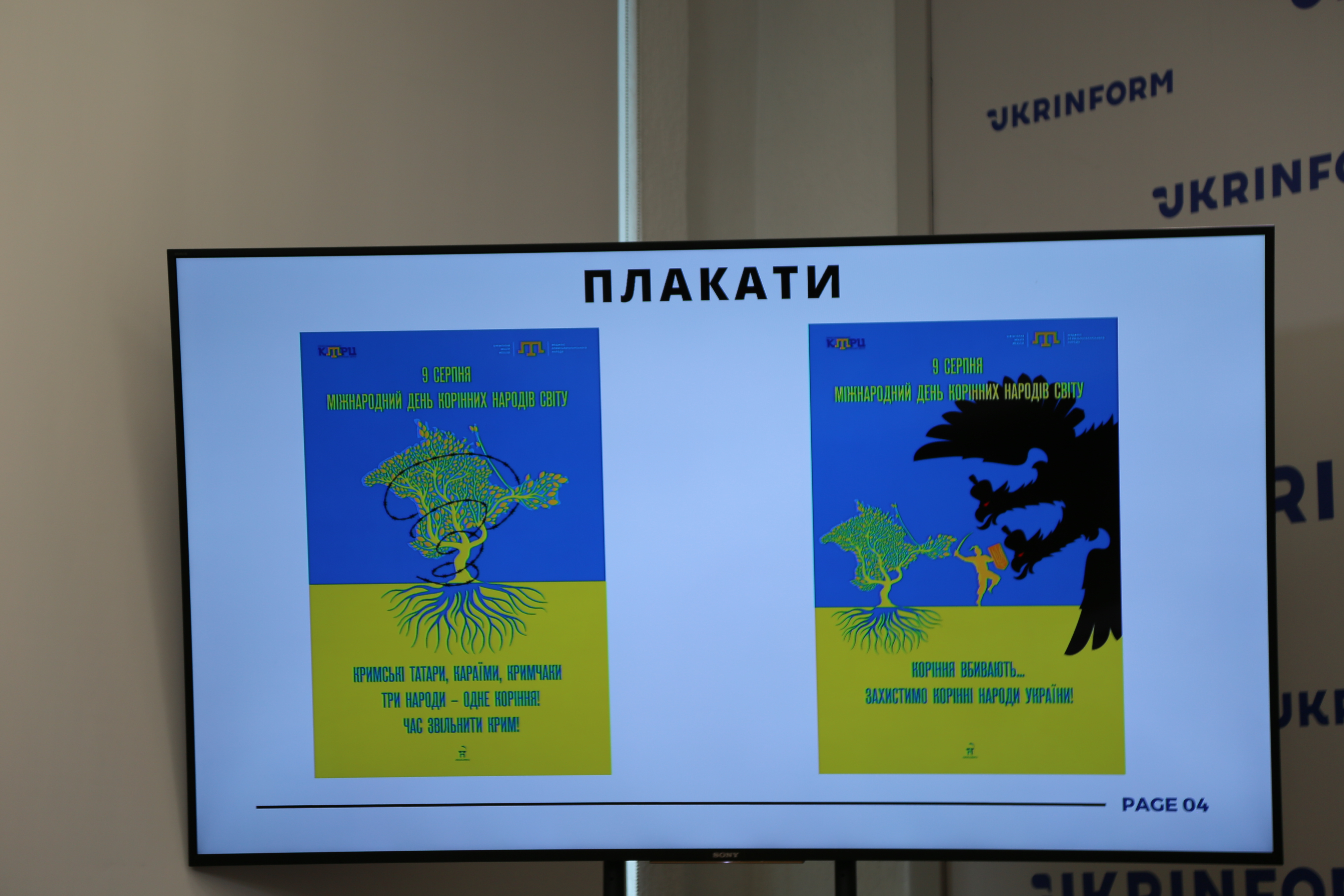 More details about this campaign can be found on the landing page – https://www.ctrcenter.org/liberatecrimea/ , as well as on our social networks: