Address to NATO member states and all Ukraine's allies

Appeal to NATO member countries and all Ukraine’s allies from Ukraine’s citizens of various ethnic and religious identities, international citizens, residing in Ukraine about Ukrainian Sky Safety, Protecting Civilian Population and Cultural Heritage of Ukraine during the Full-Scale Military Attack of the Russian Federation against Ukraine 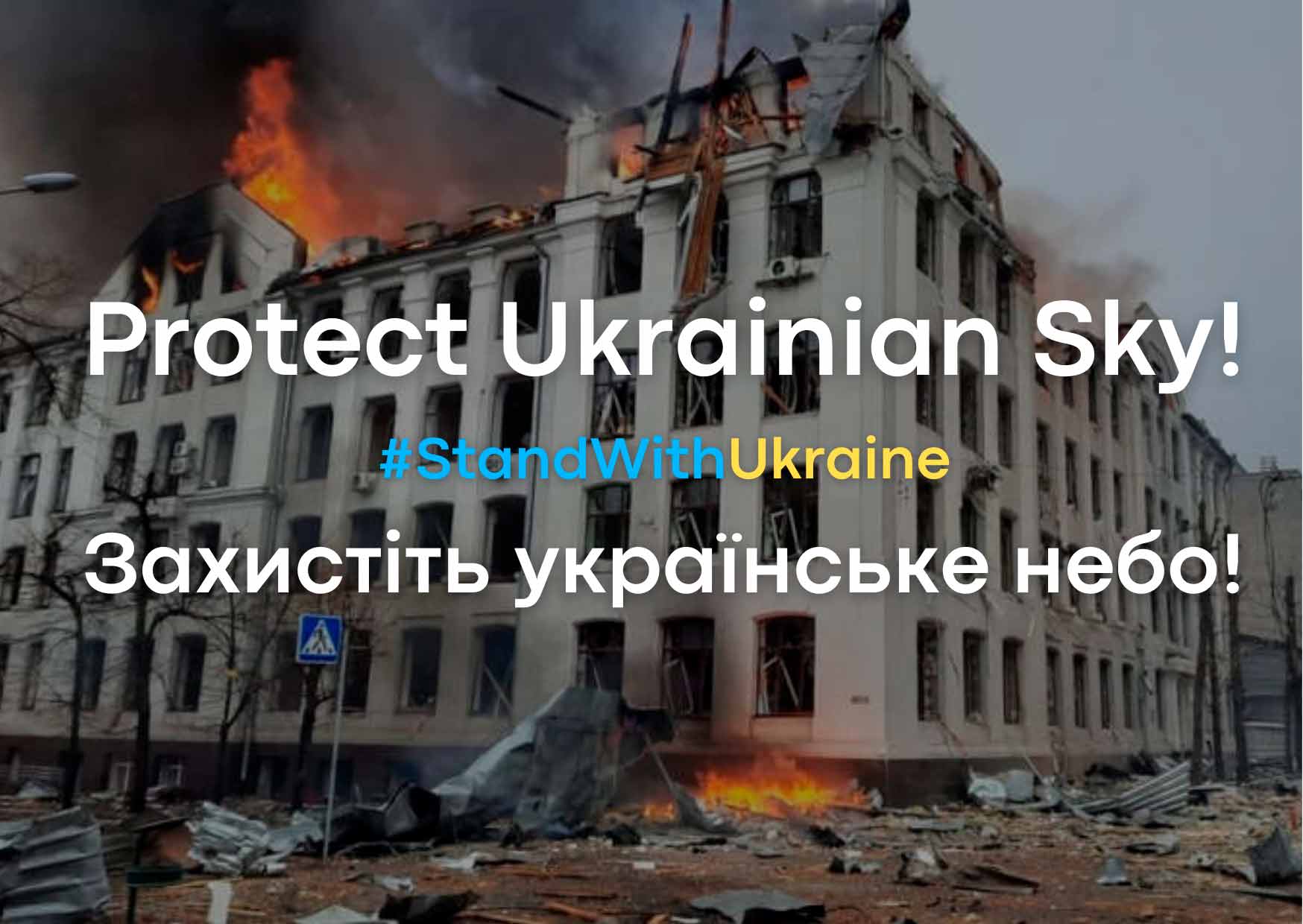 On 24 February 2022, the Russian Federation started a full-scale military attack on Ukraine. During the 14 days of the full-scale war, the Russian army launched hundreds of air attacks in many regions of Ukraine, including by cruise missile, ballistic missile, and general-purpose bombs. The enemy shamelessly uses warfare methods and tactics prohibited by the international UN Convention On Prohibitions or Restrictions on the Use of Certain Weapons Which May Be Deemed to Be Excessively Injurious or to Have Indiscriminate Effects.

Shelling of Ukrainian cities of Kharkiv, Kyiv, Irpin, Zhytomyr, Chernihiv, Bucha, Kherson, Mykolaiv, Odesa, Sumy and other places killed their peaceful inhabitants – people of various ethnic and religious identities, including children; it ruined important cultural heritage sites, caused massive destructions. On March 9, a Russian pilot purposefully bombed a maternal hospital and a clinic in the city of Mariupol. Children and their parents, who happened to be there, could be alive today if a No-Fly Zone were insured over Ukraine.

The Russian military ceased Chernobyl and Zaporizhzhia nuclear power plants, which created unprecedently large-scale threats to lives and health of people in Europe and around the whole world.

We, citizens of Ukraine, belonging to various ethnic and religious communities, citizens of other countries who live in Ukraine, call upon NATO member countries and all Ukraine’s allies to urgently take all possible measures to secure Ukrainian sky so that to protect human lives, civilian infrastructure and cultural heritage of Ukraine from mass destruction by Russian air attacks.

Why did the dolphin stranding season in the occupied Crimea start earlier?

In 2022, the dolphin stranding season began in March, when in previous years it was in May. The largest number of dolphins is observed in the Odesa region and in the occupied Crimea.

The Crimean Tatar Resource Center presents an analysis of human rights violations in the Kherson and Zaporizhzhia regions as of May 31, 2022. According to the organization, during the full-scale war, 147 arrests, 21 searches, 7 arrests, 21 murders were recorded. In the report, we also drew attention to such cases as: interrogations and torture, illegal appointment of the occupying authorities, violation of the right to peaceful assembly and identified other offenses.

The press service of the operational command South stated that at the Kakhovka hydroelectric power station, where the command post of the Southern Military District of the Russian Federation is deployed, the occupiers are not making any efforts to maintain the proper regime of the facility, which could lead to an environmental disaster.

What could be the consequences of hostilities in the Black Sea?

Since the beginning of the full-scale aggression of the Russian Federation against Ukraine, active military operations have been carried out in the Black Sea. How can this affect the ecology of the peninsula, as well as its biodiversity?

Due to the actions of the occupants, a large number of dolphins and birds died

Due to the actions of the Russian military in Crimea, a large number of dolphins and birds died. This was stated by the Mission of the President of Ukraine in the Autonomous Republic of Crimea.

Damaging the dam on the North Crimean Canal by the Russian army caused damage to the environment of Ukraine in the amount of more than 2.6 billion hryvnias

Deputy Chairman of the Committee on Environmental Policy, Chief Coordinator of the Operational Headquarters for Fixing Eco-Crimes Olena Kryvoruchkina said that the explosion of the dam on the North Crimean Canal by the Russian army caused damage to the environment of Ukraine in the amount of more than 2.6 billion hryvnias.

The occupiers have identified the most dirty cities of Crimea

A poll about the cleanest and dirty cities of Crimea was conducted on the telegram channel of the pro-government publication Vesti Krym.

On February 24, 2022, the Russian Federation launched a full-scale invasion of Ukraine. As a result of rocket attacks on Ukrainian settlements, thousands of civilians were killed - representatives of different ethnic groups and confessions, indigenous peoples, including hundreds of children.

The documentary A Struggle for Home: the Crimean Tatars was presented in the USA

On Wednesday, May 18, an international mourning online rally dedicated to the memory of the victims of the genocide of the Crimean Tatar people was held. The broadcast of the rally was watched all over the world, and representatives of the Seimas of Latvia, the President of Turkey, the Ministry for the Reintegration of the Temporarily Occupied Territories of Ukraine, as well as activists, politicians, diplomats and representatives of the Crimean Tatar and Ukrainian diasporas from around the world joined to show solidarity with the Crimean Tatars.

Eight years ago, on February 20, 2014, Russian aggression against Ukraine began with the occupation of the Autonomous Republic of Crimea and the city of Sevastopol.

Why was the deportation of 1944 a genocide of the Crimean Tatar people?

On May 18, 2022, we marked the 78th anniversary of the genocide of the Crimean Tatar people. On this day, the whole world honors the memory of the victims of this terrible crime and expresses its solidarity with the Crimean Tatars living on the territory of Ukraine and beyond.

Canada recognizes deportation of Crimean Tatars as act of genocide

The House of Commons of Canada recognized the total deportation of the Crimean Tatars in 1944 as an act of genocide. This was announced by the Ambassador of Ukraine to Canada Yuliia Kovaliv on her Facebook page.

Impunity breeds lawlessness: CTRC starts a storm in social networks on the occasion of the 78th anniversary of the genocide of the Crimean Tatar people

The Crimean Tatar Resource Center starts a storm in social networks dedicated to the Day of Remembrance of the victims of the genocide of the Crimean Tatar people. We call on every caring person, every individual, every conscientious citizen of its country to join us.

On February 20, 2014, the Russian Federation invaded Ukraine, as a result of which the Autonomous Republic of Crimea and the city of Sevastopol, the birthplace of the indigenous Crimean Tatar, Karaite and Krymchak peoples, were occupied, as well as certain areas of the Donetsk and Luhansk regions.

Campaign against supporters of Z-fascism in the occupied Crimea

The Crimean Tatar Resource Center has launched a campaign aimed at combating supporters of Z-fascism in the occupied Crimea, who stick the letter Z on their vehicles and thus support fascism and become accomplices in a crime against humanity.

Campaign Russian soldier, get out of my house

As part of this campaign, we offer every resident of Ukraine to shoot a short video calling on the Russian occupiers to leave the Ukrainian land.

We ask children to draw pictures in any format on the topic "Shelter my sky" with a call to the international community to protect the sky over Ukraine and our homes.