Delegation of Ukraine to the PACE, Crimean Human Rights Group, Crimean Tatar Resource Center, Mejlis of the Crimean Tatar People and Ukrainian Helsinki Human Rights Union carried out round table “Tortured, disappeared, persecuted: Crimea is asking for justice” on the margins of the PACE session in Strasbourg on 23d of January 2017.
The side event was held with the support of the International Renaissance Foundation.

After the Illegal occupation of the Autonomous Republic of Crimea a lot of human rights issues upraised. Legal status of the Crimean Tatars and prohibition of Mejlis of the Crimean Tatar People, coercion to acquire citizenship of Russian Federation, political persecution, disappearances, kidnapping, torture and murders, raids in houses, mosques and schools, persecution of defense lawyers – this is only partial list of al human rights violations taking place in the occupied Crimea.

Illegal persecution and enforced disappearances are cases of particular concern. During the round table cases of political prisoners Ilmi Umerov, Akhtem Chiyhoz as well as Evgeny Panov and other figurants of the of "Ukrainian saboteurs’ case» were highlighted as an illustration to the injustice taking place to dozens of other political prisoners.

Event was hosted by Georgii Logvynskyi – MP of the Verkhovna Rada of Ukraine, Deputy Head of Ukraine Delegation to PACE, who has been elected Vice-President of the PACE today.

Additionally to the issues of political persecution and enforced disappearances, facts of pressure on civic activists were disclosed. Ukrainian activists are persecuted in the adminis-trative and criminal proceedings for pro-Ukrainian activities; they are being intimidated and forced to leave Crimea. Also they are prohibited to conduct any peaceful assembly.

"The number of victims of a politically motivated prosecution increases. At the moment, according to the Crimean Human Rights Group forty Crimeans, Ukrainian citizens became the victims of such prosecution. And these are not all the cases. The Russian Federation should immediately release Vladimir Balukh, he is the symbol of Ukraine in Crimea, and all political prisoners", – stated Olga Skrypnyk.

"Aggressor acts on the same scenario, people are kıdnapped, and there is no information about them . We have video footage and testimony how people were stolen and taken away in an unknown direction Reshat Ametov, Mukhtar Arislanov, Islyam Dzhepparov, Dzhevdet Islyamov, Arsen Aliev, Ervin Ibragimov", – highlihted Eskender Bariiev. 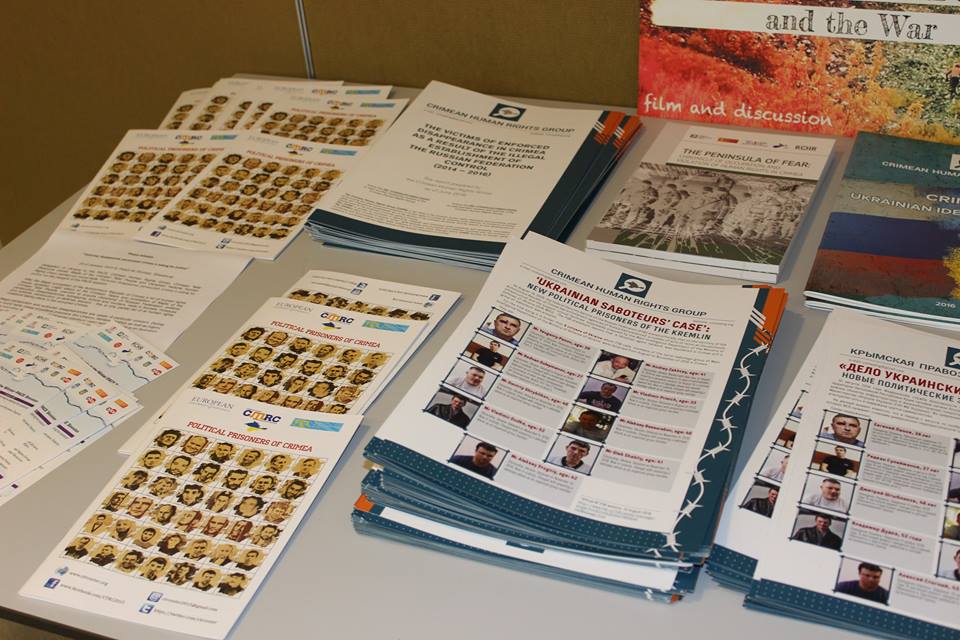 "We believe that these people are alive and we do hope that they can return to their loved ones. We are working hard so that law enforcers would be able to find these people and bring criminals to justice. And regardless of our religion, we pray and ask God to return the fathers back to their children, husbands to their wives, sons to their mothers. We all have to take the responsibility for every life and the fate of the people living in the occu-pied Crimea. And we all should unite in order to protect people living in the occupied Crimea", – declared he.

Igor Kotelyanets reenforced this position: «We, the relatives of the hostages of the Krem-lin, who are the victims of the aggressive policy of Russia, ask you to help us to resist the brazen and widespread violation of basic human rights, which is demonstrated by Russia!».

Nikolai Polozov stressed: «Release of political prisoners in Crimea is political issue and leadership of Russian Federation might consider some steps in direction of release, only in case number of conditions are met. Major condition is continuing international pressure».

Participants of the event called for restoration of justice for dozens of people in Crimea and urged members of the PACE and other representatives of the international community to promote this process.