Statement of the Ukrainian public on Russian intervention in Kazakhstan 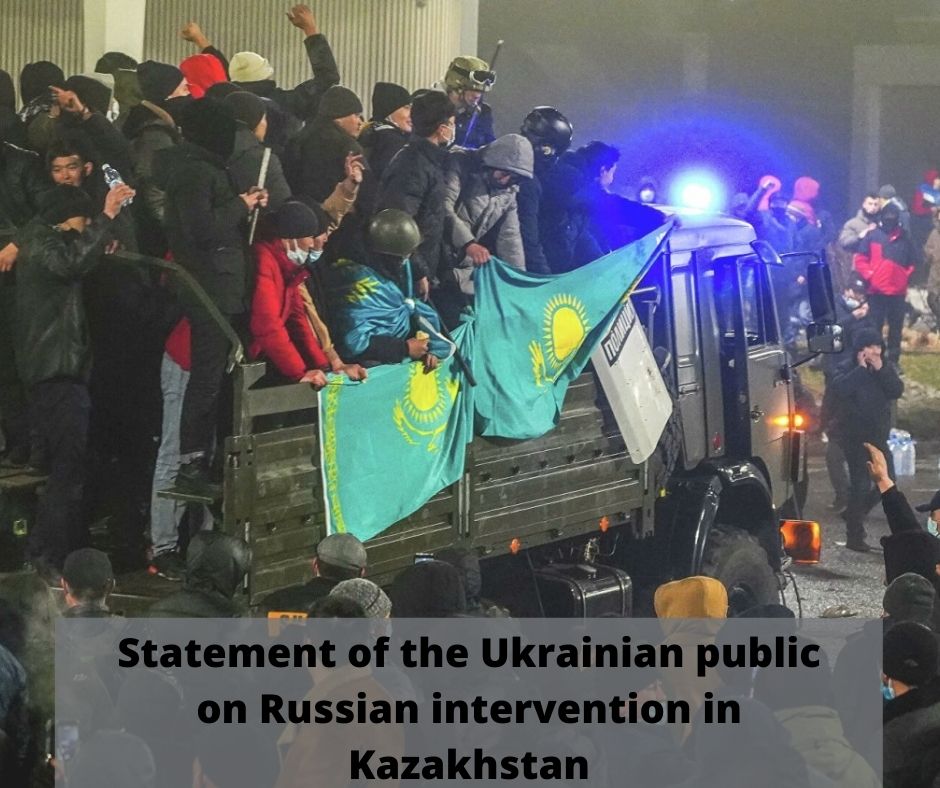 Thus, the Russian Federation already bears part of the responsibility for the gross violations of international law, human rights and violations of humanitarian law that objectively occur in Kazakhstan as part of a violent confrontation, murders, torture, imprisonment and other persecution of citizens.

Despite the implementation of the intervention at the invitation of the President of Kazakhstan and under the guise of the so-called peacekeeping mission of the Collective Security Treaty Organization (CSTO), its international legal legitimacy is at least doubtful. Neither the UN nor the OSCE, as authorized international organizations in the field of security, determined the need for foreign intervention in the situation in Kazakhstan, this issue was not considered by the UN Security Council either before the intervention, or later.

Although the protests in Kazakhstan were obviously widespread and massive, and the demands of the protesters, at least before the start of the violent confrontation, did not contradict the constitutional requirements, the authorities of Kazakhstan did not even declare an attempt to dialogue with the protesters. At the same time, the Kazakhstani authorities used all methods of blocking the dissemination of any information outside the country about the course of the internal political crisis; the mechanisms of dialogue, mediation and reconciliation provided for by international law were not applied.

Kazakhstan is a member of the UN, whose fundamental principles of the Universal Declaration of Human Rights require that human rights be protected by the force of law. International agreements to which Kazakhstan is a party oblige it to refrain from arbitrary deprivation of life and unconditionally avoid torture and ill-treatment, oblige it to guarantee detainees a minimum of minimum rights and respect for their dignity.

Without exhausting the possibilities of internal dialogue, the authorities of Kazakhstan immediately resorted to using the tools provided for within the framework of the CSTO. These mechanisms have become the so-called legitimation of military intervention and the subsequent military presence of the Russian Federation on the territory of Kazakhstan, which already has signs of effective control. In addition, any participation in the internal confrontation of peacekeepers makes this conflict international and applies both to the security forces and the army of Kazakhstan, and to peacekeepers, the requirements of the Geneva Conventions of 1949 and their protocols.

For eight years now, Ukraine has been daily resisting Russian armed aggression and fighting the occupation of Crimea, which the Russian Federation committed in violation of the norms and principles of international law, the UN Charter, the CSCE Final Act of 1975, the Memorandum of Security Assurances in connection with Ukraine's accession on nuclear non-proliferation weapons (the so-called Budapest Memorandum) and numerous bilateral agreements with Ukraine.

Considering the abovementioned, we state the following.

Kazakhstan and its people today face the great threat of being re-colonized and plundered by Russia in its project to restore ephemeral Soviet greatness.

Kazakhstan, as an independent state, has every opportunity for internal dialogue and can resolve domestic political issues without the interference of other states. The authorities of Kazakhstan have access to such international instruments of mediation and conflict resolution that do not lead to the deployment of foreign military contingents and occupied territories.

The international community must understand the true, and not the declared, purpose of the existence of the CSTO as an organization whose unity is ensured by coercion, which is only an instrument of Russian expansion and military intervention. In this dimension, the actual coercion of Kyrgyzstan by Russia on the participation of the Kyrgyz military in the operation in Kazakhstan has become characteristic.

The CSTO is not and can never be recognized as an organization that can carry out peacekeeping missions under the mandate of the UN Security Council.

We pay special attention to the leadership of the CSTO group in Kazakhstan by Colonel General Andrey Serdyukov, who was directly involved in the decision of the aggressive war against Ukraine, in the occupation of Crimea and regions of the East of Ukraine, who led the paramilitary formations of war crimes and crimes against humanity on the territory of Ukraine occupied by the Russian Federation, racial discrimination and massive disregard for fundamental human rights.

In the future, if effective control by the Russian Federation over the authorities of Kazakhstan is confirmed by objective circumstances, the international community and international organizations should assess the ability of the current political regime of Kazakhstan to represent the Kazakh people, who have inalienable rights to self-determination, resistance to tyranny and foreign aggression and sustainable development.

The author of the statement is the ANTS National Interest Protection Network and dozens of other human rights defenders, public figures and activists. The Crimean Tatar Resource Center also shares this position, therefore it became one of the signatories of this document.

The application is open for signing. Anyone who wants to join, send your details to ants.ngo@gmail.com