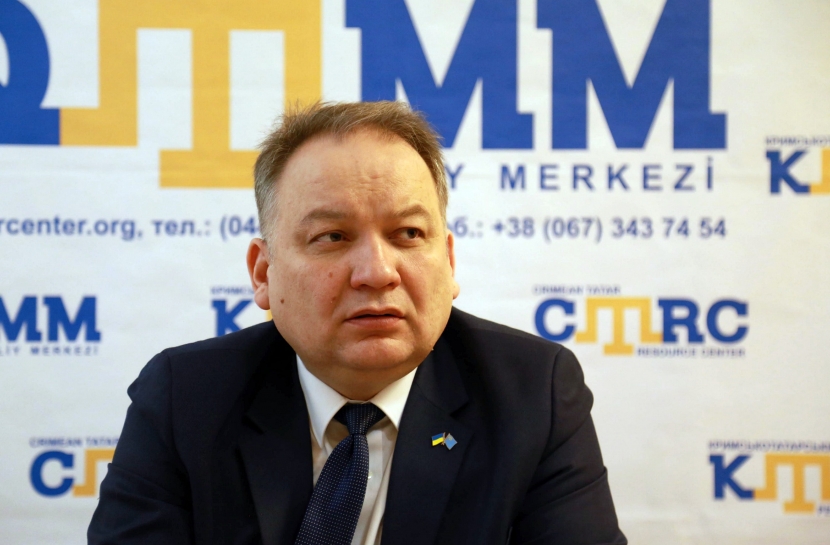 Item 4 Discussion on the six mandate areas of the Permanent Forum (economic and social development, culture, environment, education, health and human rights), with reference to the United Nations Declaration on the Rights of Indigenous Peoples

I would like to express my gratitude to the member states that supported the resolutions "The situation with human rights in Crimea" and "Russian militarization of Crimea, the Black and Azov seas" adopted by the UN General Assembly in 2020.

Unfortunately, not all states that declare their support for indigenous peoples de facto implement the recommendations of the Permanent Forum.

Despite the fact that the Russian authorities in Crimea officially recognized the Crimean Tatar language as one of the official languages, the scope of its use is very narrow, there have been cases of threats to fire workers for speaking their native language, which is a violation of Articles 2, 8 and 17 of the Declaration.

Items of cultural heritage of the Crimean Tatars were exported from Crimea after the annexation of Crimea by Russia in 1783.

Since 2014, the Russian authorities have been falsifying the historiography of Crimea, including in school history books. They carry out excavations without the consent of the representative body of the indigenous people, and take artifacts to Russia. This violates article 15 of the Declaration.

Under the guise of restoration, the authentic materials of the Bakhchysarai historical and cultural reserve Khan's Palace are being destroyed, Articles 8, 11, 15, 31 of the Declaration are being violated.

In violation of Articles 8, 25, 26, 27 of the Declaration, the Russian authorities illegally use the natural resources of Crimea.

Due to the irrational use of fresh water by the occupants and the settlement by Russians, a real humanitarian catastrophe may arise in Crimea.

In Crimea, the Russian authorities are building military bases and importing military equipment. Military exercises are held regularly. These actions violate Articles 29, 30 of the Declaration.

FSB persecutes indigenous human rights defenders of Crimea. In 2020, 229 arrests, 45 interrogations, 26 searches and 199 arrests of Crimean Tatars were recorded in Crimea. This is a direct violation of Article 12 of the Declaration.

I offer the following recommendations:

1. Develop programs to protect indigenous leaders and human rights defenders who are persecuted by states, incl. those who are forced to live in exile;

2. To establish interaction of the UN Permanent Forum with other international organizations for synergy in the implementation of the collective rights of indigenous peoples;

3. It is necessary to develop recommendations for ensuring the security of indigenous peoples in the context of an interstate conflict;

4. It is necessary to share the positive experience of states that have national action plans to protect the rights of indigenous peoples. We need to introduce good practice.

Thank you very much for  your attention!