CTRC team congratulates on the Day of the Crimean Tatar flag 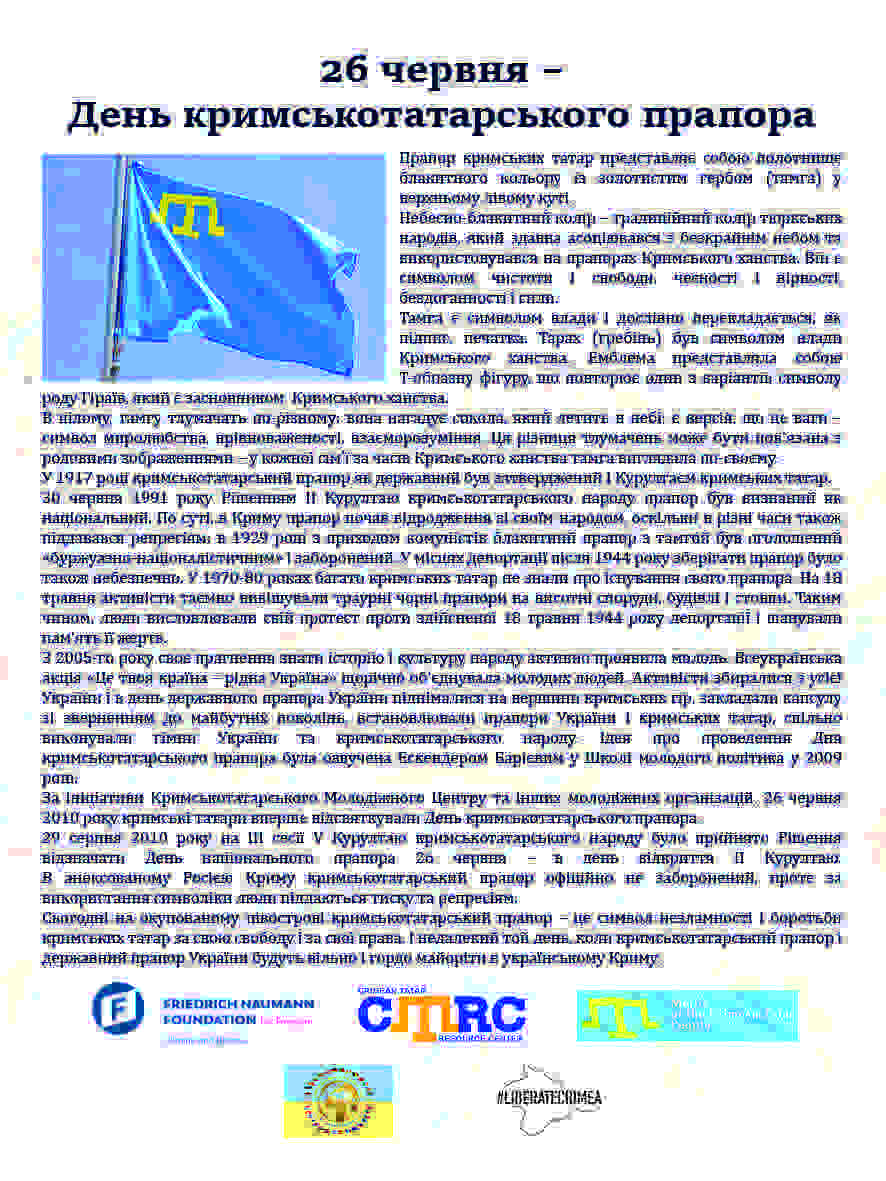 The flag of the Crimean Tatars is a blue cloth with a golden emblem (tamga) in the upper left corner. Sky blue is the traditional color of the Turkic peoples, which has been used since ancient times on the banners of the Crimean Khanate. It is a symbol of purity and freedom, honesty and fidelity, impeccability and strength.

On June 30, 1991, by the decision of the Second Qurultay of the Crimean Tatar people, the flag was recognized as national. In fact, in Crimea, the flag began to revive with its people, because at different times it also succumbed to repression: in 1929, with the advent of the Communists, the blue flag with tamga was declared as being bourgeois-nationalist and banned. In places of deportation after 1944, it was also dangerous to keep the flag. In 1970-80, many Crimean Tatars did not know about the existence of their flag. On May 18, activists secretly hung mourning black flags on high-rise buildings, buildings and poles. Thus, people expressed their protest against the deportation carried out on May 18, 1944 and honored the memory of its victims.

Since 2005, young people have actively shown their desire to know the history and culture of their people. The all-Ukrainian action “Your Country - Ukraine” annually brought together young people. Activists from all over Ukraine gathered and on the day of the national flag of Ukraine climbed to the tops of the Crimean mountains, laid a capsule with an appeal to future generations, set flags of Ukraine and Crimean Tatars, performed anthems of Ukraine and the Crimean Tatar people. The idea of holding the Crimean Tatar Flag Day was voiced by Eskender Bariiev at the School of Young Politician in 2009.

On August 29, 2010, at the III session of the V Qurultay of the Crimean Tatar people, a decision was made to celebrate National Flag Day on June 26, the opening day of the II Qurultay.

Today, the flag is not officially banned in the annexed Crimea by Russia, but people are subjected to pressure and repression for using such symbols.

????? ?? @ctrcenter
facebook
youtube
Changes in the Water Surface Area of Reservoirs of the Crimean Peninsula and Artificial Increases in Precipitation as One of the Possible Solutions to Water Shortages
Statement of the CTRC in connection with mass searches and arrests of Crimean Tatar activists
An indicator of the effectiveness of the Law of Ukraine“On the Indigenous Peoples of Ukraine is Putin’s hysterical reaction - Bariiev
Russian security forces beat Enver Krosh on the way to Simferopol
Workshop on Human-Centered Design: the CTRC team continues to improve itself