Home / Analitics / Eskender Bariiev: First anniversary since the release of Crimean Declaration. What it means and what to expect?

Eskender Bariiev: First anniversary since the release of Crimean Declaration. What it means and what to expect?

July 25, 2019 marks the year since the adoption of the “Crimean Declaration” by the US State Department. What impact does this declaration have? What should be expected? What is the de-occupation of Crimea from today's perspective? What should be done for Crimea and its de-occupation? Who can help us? How should we involve like-minded people to this policy? 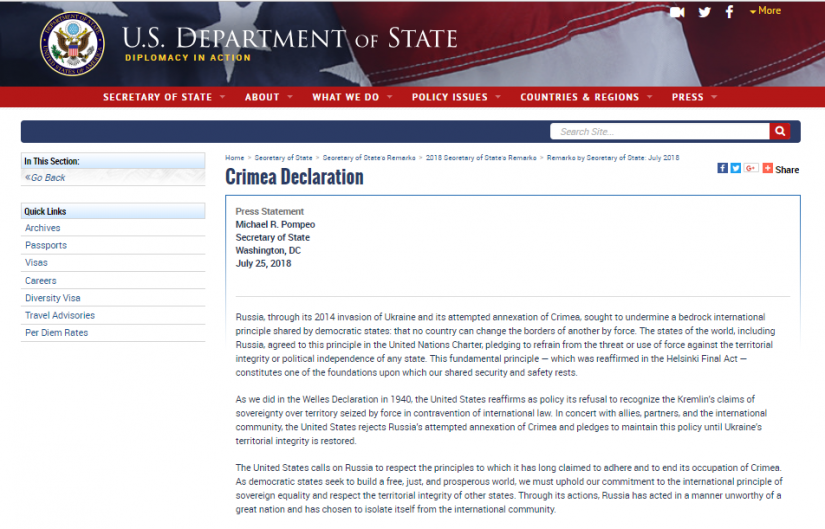 "Russia, through its 2014 invasion of Ukraine and its attempted annexation of Crimea, sought to undermine a bedrock international principle shared by democratic states: that no country can change the borders of another by force. The states of the world, including Russia, agreed to this principle in the United Nations Charter, pledging to refrain from the threat or use of force against the territorial integrity or political independence of any state. This fundamental principle — which was reaffirmed in the Helsinki Final Act — constitutes one of the foundations upon which our shared security and safety rests".

The Declaration says... Yes, by the invasion and the illegal annexation of Crimea, Russia undermines the basic international principle: no country can by the use of force change the borders of another country. This document officially and publicly proclaims the policy of Washington about non-recognition of annexation of the peninsula by the Russian Federation.

The State Department once again pointed out that Russia violated the fundamental principles of international policy set in and signed in 1975 by the USSR Helsinki Final Act, which clearly states: “refrain from any demand for, or act of, seizure and usurpation of part or all of the territory of any participating State”. And so let's return to the Declaration. The document notes that, “just as they did in the case of the “Welles Declaration”, the United States confirms its policy of non-recognition  of  Kremlin’s claims to sovereignty over the territory,” which was seized by force in violation of the international law.

Let me remind you, "Welles Declaration" was signed by acting US Secretary of State Sumner Welles in July 1940. By this document, Washington refused to recognize the annexation of Latvia, Lithuania and Estonia by the USSR.

I would like to draw your attention to the fact that some skeptics, comparing the “Crimean Declaration” with the “Welles Declaration”, first of all give an evaluation of the time frames, i.e. it took 50 years,  for the de-occupation of the Baltic countries.

We believe that the importance of this document is the official policy of the United States of non-recognition of annexation of Crimea. And the time frames for achieving de-occupation is directly proportional to the synergy of the activity of Ukraine and its civil society, international allies and human rights organizations.

That's why the international movement for the de-occupation of Crimea and solidarity with the Crimean-Tatar people #LIBERATECRIMEA was initiated.

This is also stated in the Crimean Declaration: “In concert with allies, partners and the international community, the United States rejects Russia’s attempted annexation of Crimea and pledges to maintain this policy until Ukraine’s territorial integrity is restored”.

The Head of the US   Department of State during the hearings in the Senate Foreign Relations Committee said a year ago: "There will be “no relief” from sanctions imposed by the United States after the attempted annexation “until Russia returns control of the Crimean Peninsula to Ukraine. That's why today we officially confirm our commitment to the policy of the US non-recognition of Crimea’s annexation by issuing the "Crimean Declaration".

Of course, Russia couldn't help responding to the Crimean Declaration. Thus the representative of the Ministry of Foreign Affairs of Russia, Maria Zakharova, called the declaration the "formal document". However, she nevertheless emphasized that this document determines the US official non-recognition policy of Crimea as a part of Russia.

There was the immediate reaction of London and Berlin to the Crimean Declaration.

And German Minister for Foreign Affairs Heiko Maas assured that Berlin "will not move to the usual agenda, no matter how long it lasts".

Well, where is the position of other guarantors pledging security assurances to Ukraine. After all, the Budapest Memorandum was signed by the United States,  Great Britain and Russia, and China and France joined in their statements.

And yet who is next?

????? ?? @ctrcenter
facebook
youtube
Ukrainian-Chinese cooperation and deoccupation of Crimea: CTRC invites you to participate in the Crimean Discussion Club
Occupants upheld the verdict of activist Kadyrov
Regular searches were conducted in the occupied Crimea
In Crimea, the situation is all about absolute legal nihilism and lawlessness - Kateryna Yosypenko
Repressions in the occupied Crimea continue - CTRC report for the first half of 2021

The law On Indigenous Peoples will not work without regulations - Bariiev