Sanctions potential of the sphere of nature management in Crimea 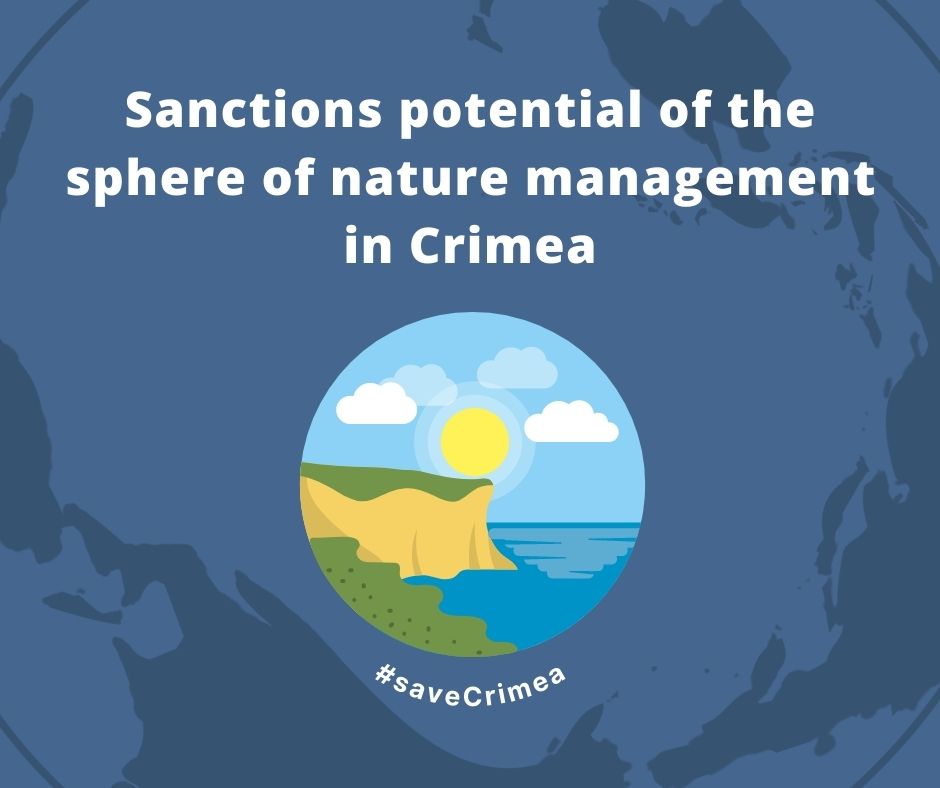 More than 7 years have passed since the occupation of Crimea by Russia. The overwhelming majority of the countries of the world supported Ukraine with a policy of non-recognition. The Crimean Platform Summit reminded the world and our neighbors that Crimea is Ukraine, and it is only our temporarily occupied territory. Ukraine proclaims that the only way of de-occupation is diplomatic, which is carried out in a variety of ways – through sanctions pressure, through diplomatic and public activity, through a constant reminder of the affiliation of Crimea, through the vigilant attention of Ukrainian society to the Crimean issue. One of the cornerstone forms of the sanctions policy towards Crimea is the monitoring of the state of the environment, nature management and the accumulation of evidence of violations of Ukrainian environmental legislation and international conditions, which are carried out by the Russian Federation in Crimea. We have repeatedly raised the question of why various environmental problems arise in Crimea and how the occupying authorities are trying to solve them, and why this solution in most cases is doomed to low efficiency.

Let's take a look at where and how nature management is carried out in Crimea. Let's start with minerals and the extraction of mineral resources. In the Crimea, according to official data, at the time of the occupation, there were 24% of all limestones suitable for exploitation (mining) in Ukraine. All Crimean limestone deposits are still being exploited. The need of the metallurgical industry of Ukraine for fluxing limestones, which is 20-25 million tons per year, was almost completely satisfied by mining in quarries located in the Donetsk Region and in Crimea, where 97% of the explored reserves of limestones for the metallurgical industry are concentrated. Ukrainian metallurgists will not receive enough flux limestone now, because in addition to the lost Crimea, a significant part of the limestone deposits ended up in the part of the Donbas that is not controlled by Ukraine. However, back to the Crimea.

Currently, the sale and extraction of limestone is concentrated in a few private companies, one of the largest is the AMONTE company (Vidkryte village, historical name – Nine Bront), significant production of Pontian limestone is carried out at the Ivanovske deposit, but sanctions should focus on companies that are buyers of limestone in Russia.

It is large enterprises that should be held responsible for violating Ukrainian legislation, except for the direct miners of mineral resources, who are representatives of small and medium-sized businesses.

Balaklava Mine Administration (the name is still preserved) supplied fluxes to most of the metallurgical plants in Ukraine. Currently, Russian companies are buyers of fluxes. Of course, since 2014, no environmental impact checks have been carried out under the current Ukrainian legislation.

For fluxing sinter at the Kamysh-Burun plant, it turned out to be more profitable to use local chemically suitable Sarmatian, Meotic and Pontic shell limestones. Recent reports of mass bird deaths in the vicinity of the plant are evidence of the environmental hazards of the plant.

Sand mining in Kerch. Mining is carried out in several places, but the most dangerous is the use of the Lower Churbas tailing dump. Due to the significant concentration of heavy metals and other pollutants, both the mining itself and the use of sand threaten human health, as well as the environment of the Kerch Peninsula and the Black Sea.

In the sand of the dam, bordering on waste, the content of arsenic is 377 times higher than the maximum allowable concentration.

The tailing dump (a special facility for the safe storage of toxic substances) has been in operation since 1968 and was intended to collect toxic waste from the Kamysh-Burun iron ore plant. According to Crimean media, this waste is used for construction.

Water. In the Crimean mountains, there was a significant shortage of precipitation: in the Ai-Petri region, 43% of the norm fell, and in the region of the Anhar Pass, 26% of the norm. Unfavorable synoptic conditions led to the preservation of the autumn border regime in the basins of all rivers. There was a slight fluctuation in water levels, mainly in the direction of decline. The Alma River above the Partyzanske gauging station has dried up in places. Most of the rivers in the mudflow basins of the municipal districts of Alushta, Sudak and Feodosiia continue to dry out, the Hydrometeorological Center said.

According to the Crimean weather forecasters, the average water flow on the rivers Belbek, Demerdzhi, Salhir, Kokkozka was within the normal range, on the rivers Kuchuk-Karasu, Kuchuk-Uzenbash and in the lower reaches of the Kacha River within 7-28% of the norm, and on the other rivers no more 40-68% of the norm.

Hydrocarbons. In 2014, Chornomornaftohaz had 17 fields on its balance sheet, including 11 gas fields, 4 gas condensate fields and 2 oil fields. So, according to official data of Chornomornaftohaz, as of April 2019, 9.3 billion cubic meters were stolen from Ukrainian subsoil of natural gas and 280 thousand tons of liquid hydrocarbons. For comparison, the total hydrocarbon reserves of all fields on the peninsula are estimated: natural gas – 58.56 billion cubic meters, gas condensate and oil – 3,761 thousand tons. To date, it is not known how much hydrocarbons are illegally extracted by Russia in Crimea from Ukrainian fields, but back in 2017, Chornomornaftohaz estimated the loss of its assets at $5 billion, and already in 2020 this amount was increased by 1.5 times.

The sanctions should include companies that buy oil products from offshore oil production. There are no oil refineries in Crimea. Oil refining is carried out in the Russian Federation, in terms of logistics, this is the Tuapse refinery. Sanctions should be applied to this enterprise and its partners.

Nature reserve fund. Changing the status of nature reserves. Destruction of trees and shrubs, representatives of flora and fauna. It is not known exactly how much. This is done by companies implementing infrastructure projects (JSC VAD, St. Petersburg). This company should be on the maximum number of sanctions lists.

Military activity. Extermination of flora and fauna, pollution of land resources of the Kerch Peninsula (Ministry of Defense of the Russian Federation and contractors) during military exercises, on an area of more than 55,000 hectares. Due to the explosions of modern shells, it can be confidently asserted that the soil will not be capable of fertility and, for reasons of environmental safety, it must be removed. Sanctions should be applied to companies providing military exercises in Crimea.

Thus, it can be noted that the ecological situation in Crimea needs careful study, constant monitoring, identification of real and potential dangers and threats, as well as studying the situation that has developed with nature management in Crimea. In particular, organizations violating international and Ukrainian legislation that illegally extract minerals should be included in the sanctions lists, and not only direct miners and users of natural resources, but also organizations using these resources for their own economic and business needs. This is what the attention of the expert community should be focused on.