Home / Our activities / Natural resources and the state of the environment of Crimea in the economic dimension: collecting evidence and assessing the consequences of management during the occupation

Natural resources and the state of the environment of Crimea in the economic dimension: collecting evidence and assessing the consequences of management during the occupation 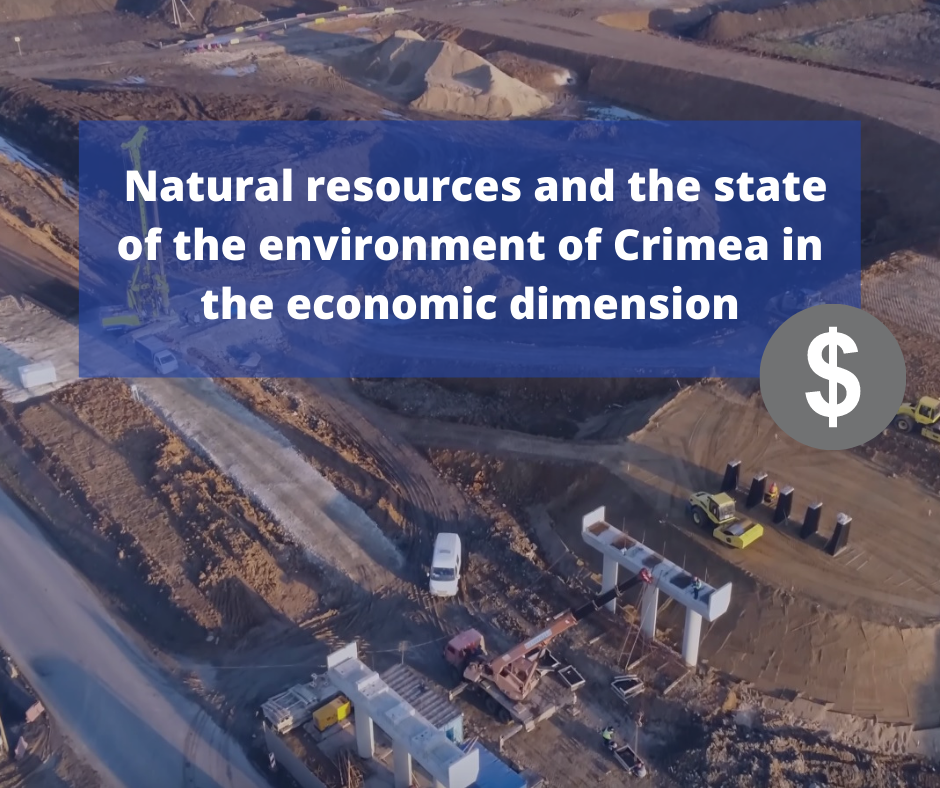 Climate change and its negative manifestations are becoming part of our lives. We see record temperature anomalies almost every month, long dry periods alternating with heavy downpours, heat waves in summer with unusually high temperatures and gale-force winds. An unexpected cool spring this year and a long winter in 2021. By the way, the meteorological winter began only in January. A long and cool spring has nothing to do with the general warming trend. We expect that in May we will observe mainly summer weather.

Crimea finally got a lot of precipitation and snow at the end of winter, but this did not solve the problem of providing freshwater resources. Why? The main answer is the destruction of landscape conditions for filling rivers and reservoirs through various infrastructure projects, chaotic development, uncontrolled drilling of wells in search of groundwater.

The first part is harm to the natural environment, biodiversity, impact on protected areas, etc. Let's start with simple things. The territories of the nature reserve fund have repeatedly become the subject of a so-called creative approach to the existing borders and the borders that existed before 2014. The construction of the Tavryda highway was carried out without taking into account environmental legislation. The route passed through the Yalta Biosphere Reserve. But according to the first shock from this news, the next steps were the construction of civilian facilities on the territory of Foros Park (for more details - in the Ukrainian media and reports from Foros) with a violation of the ecosystem integrity of the facility, the Crimean Observatory, which is losing its scientific significance due to light pollution - the consequences of residential development in the village. Scientific, etc.

The second block of questions and claims is the state of the water resources of the peninsula and the attempt of the occupying authorities to resolve this issue due to the chaotic drilling of wells, small volumes of desalinated water, the senseless construction of hydraulic structures in the absence of surface runoff. The proposal to drill the bottom of the Sea of Azov or deep wells with a depth of more than 1000 m, in addition to skepticism, causes natural concern about the consequences of such activities for the environment.

The third block of questions is the state of soils in the central Crimea and environmental pollution in the north of the peninsula. Numerous accidents at Crimea Titan (now Titanium Investments LLC), the inability to support irrigated agriculture, the reduction in economic activity in the northwest and northeast of the peninsula - all this leads to a gradual and consistent neglect of environmental issues. It should be noted that so far we are not able to remotely assess the consequences of environmental pollution due to pollutant emissions at the Krasnoperekopsk and Armiansk plants, but even from the materials of the Russian media, the situation has long gone beyond the limits of a normal accident. Indirectly, it can be noted that the change in leaf color and its absence on trees in general indicates extremely dangerous levels of pollution after emissions at the Titan plant on August 23-24, 2018. Most likely, we are talking about exceeding the maximum permissible concentrations of pollutants in repeatedly. The consequences of emissions remote in time will be traced for years (by the way, as in the case of an accident (fire) at an oil depot in the Vasylkiv district, namely, in the village of Kriachki, Vasylkiv district, Kyiv region, which began on June 8, 2015 and lasted 8 days. The base belongs to LLC Bytremstroimaterialy and is part of the network BRSM-Oil. As of the beginning of the fire, there were 14 thousand tons of oil products. The amount of damage caused exceeded 1 billion hryvnias).

Now let's move on to valuation. How is the damage caused to environmental objects due to violation of environmental legislation now determined in Ukraine? There are appropriate methods approved by the government.

According to Russian sources, the motor road service of the Republic of Crimea compensated for the cost of trees and shrubs cut down during the construction of the Tavryda highway. Compensation for cutting down trees along the Tavryda was estimated at 249 million rubles. It is noted that during the construction and installation work along the new federal highway, more than 111 thousand trees and 116 thousand shrubs were subject to demolition. Due to the fact that, in the opinion of the occupation authorities, it is not advisable to carry out landscaping work along the Tavryda highway before the completion of work and carry out land reclamation, a monetary form of compensatory landscaping is provided in the amount of replacement cost. The amount of compensation amounted to more than 209 million rubles. The funds were transferred to the Ministry of Ecology and Natural Resources of the Republic of Crimea, which will decide on the volume and location of compensatory landings. And specifically, what should these funds go for? According to the so-called Deputy Minister of Ecology and Natural Resources of Crimea, Vladimir Kapitonov, about 10,000 trees are to be planted. I note instead of cut down 111,000 trees and 116,000 shrubs. So, just calculate that the price of planting 1 tree costs more than 20 thousand rubles. And another question: what kind of felled trees were they, how much conservation value did they have? There is not a word about this in the official reports of the Russian authorities and the media. According to Ukrainian law, illegal felling of one tree costs over UAH 10,000 to the culprit, and UAH 432 per bush. Thus, the damage caused only during the laying of the Tavryda highway to the forest resources and shrubs of Crimea is more than 1.15 billion hryvnias.

We follow, we observe, we accumulate information for a conversation in the international courts.

Why did the dolphin stranding season in the occupied Crimea start earlier?

In 2022, the dolphin stranding season began in March, when in previous years it was in May. The largest number of dolphins is observed in the Odesa region and in the occupied Crimea.

The Crimean Tatar Resource Center presents an analysis of human rights violations in the Kherson and Zaporizhzhia regions as of May 31, 2022. According to the organization, during the full-scale war, 147 arrests, 21 searches, 7 arrests, 21 murders were recorded. In the report, we also drew attention to such cases as: interrogations and torture, illegal appointment of the occupying authorities, violation of the right to peaceful assembly and identified other offenses.

The press service of the operational command South stated that at the Kakhovka hydroelectric power station, where the command post of the Southern Military District of the Russian Federation is deployed, the occupiers are not making any efforts to maintain the proper regime of the facility, which could lead to an environmental disaster.

What could be the consequences of hostilities in the Black Sea?

Since the beginning of the full-scale aggression of the Russian Federation against Ukraine, active military operations have been carried out in the Black Sea. How can this affect the ecology of the peninsula, as well as its biodiversity?

Due to the actions of the occupants, a large number of dolphins and birds died

Due to the actions of the Russian military in Crimea, a large number of dolphins and birds died. This was stated by the Mission of the President of Ukraine in the Autonomous Republic of Crimea.

Damaging the dam on the North Crimean Canal by the Russian army caused damage to the environment of Ukraine in the amount of more than 2.6 billion hryvnias

Deputy Chairman of the Committee on Environmental Policy, Chief Coordinator of the Operational Headquarters for Fixing Eco-Crimes Olena Kryvoruchkina said that the explosion of the dam on the North Crimean Canal by the Russian army caused damage to the environment of Ukraine in the amount of more than 2.6 billion hryvnias.

The occupiers have identified the most dirty cities of Crimea

A poll about the cleanest and dirty cities of Crimea was conducted on the telegram channel of the pro-government publication Vesti Krym.

On February 24, 2022, the Russian Federation launched a full-scale invasion of Ukraine. As a result of rocket attacks on Ukrainian settlements, thousands of civilians were killed - representatives of different ethnic groups and confessions, indigenous peoples, including hundreds of children.

The documentary A Struggle for Home: the Crimean Tatars was presented in the USA

On Wednesday, May 18, an international mourning online rally dedicated to the memory of the victims of the genocide of the Crimean Tatar people was held. The broadcast of the rally was watched all over the world, and representatives of the Seimas of Latvia, the President of Turkey, the Ministry for the Reintegration of the Temporarily Occupied Territories of Ukraine, as well as activists, politicians, diplomats and representatives of the Crimean Tatar and Ukrainian diasporas from around the world joined to show solidarity with the Crimean Tatars.

Eight years ago, on February 20, 2014, Russian aggression against Ukraine began with the occupation of the Autonomous Republic of Crimea and the city of Sevastopol.

Why was the deportation of 1944 a genocide of the Crimean Tatar people?

On May 18, 2022, we marked the 78th anniversary of the genocide of the Crimean Tatar people. On this day, the whole world honors the memory of the victims of this terrible crime and expresses its solidarity with the Crimean Tatars living on the territory of Ukraine and beyond.

Canada recognizes deportation of Crimean Tatars as act of genocide

The House of Commons of Canada recognized the total deportation of the Crimean Tatars in 1944 as an act of genocide. This was announced by the Ambassador of Ukraine to Canada Yuliia Kovaliv on her Facebook page.

Impunity breeds lawlessness: CTRC starts a storm in social networks on the occasion of the 78th anniversary of the genocide of the Crimean Tatar people

The Crimean Tatar Resource Center starts a storm in social networks dedicated to the Day of Remembrance of the victims of the genocide of the Crimean Tatar people. We call on every caring person, every individual, every conscientious citizen of its country to join us.

On February 20, 2014, the Russian Federation invaded Ukraine, as a result of which the Autonomous Republic of Crimea and the city of Sevastopol, the birthplace of the indigenous Crimean Tatar, Karaite and Krymchak peoples, were occupied, as well as certain areas of the Donetsk and Luhansk regions.

Campaign against supporters of Z-fascism in the occupied Crimea

The Crimean Tatar Resource Center has launched a campaign aimed at combating supporters of Z-fascism in the occupied Crimea, who stick the letter Z on their vehicles and thus support fascism and become accomplices in a crime against humanity.

Campaign Russian soldier, get out of my house

As part of this campaign, we offer every resident of Ukraine to shoot a short video calling on the Russian occupiers to leave the Ukrainian land.

We ask children to draw pictures in any format on the topic "Shelter my sky" with a call to the international community to protect the sky over Ukraine and our homes.